Chicks grow up and move away....across the yard.

With the turklets arriving in just a few days, it was time to move the chick(en)s outside. Not to mention they were packed in like sausages at 5 and a half weeks old. They needed some room to stretch out and play. And, frankly, they stunk. They seem to be adjusting to their ne

w home well. Since they have thus far lived inside for their entire lives, they are mildly terrified to leave the coop. I literally had to pick up each and every one of them on the fifth day and relocate them in the yard. Some of them didn't understand how to get home and so I had to pick them right back up again at the end of the day and put them inside. Since then they have become foraging masters and are waiting for me at the gate each morning to rush outside and explore.

Our cockrels are starting to assert some dominance and a couple of them even have a few groupies that follow them around all day. Oddly enough none of the roosters are crowing yet and so, although they are hitting it off with 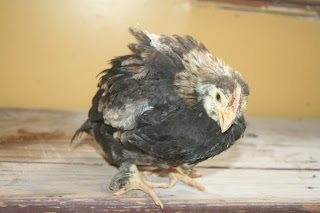 the ladies, they still cheep like babies. We expect the crowing wars to begin any day now though. When they do, we will finally know who "Brym's 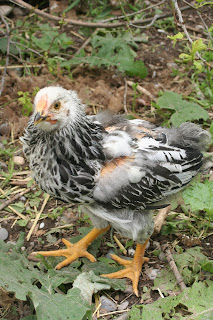 Next Top Rooster" will be. We already have two out of the running for sure. Quasimodo and Franken-chicken have been doomed from the beginning. We are pretty sure Quasimodo got bumped around a little too much in his egg and so he ended up looking like...well...Quasimodo. He has a freakish hooked beak and a hunched back. He also isn't the brightest chick in the coop if you know what I mean. Franken-chicken...well we suspect fowl play in the gene pool. His general lack of feathers has led him to be the object of all of the other chickens aggression. Luckily he can run like the wind and avoids their endless taunting and mockery. Needless to say, we will not be letting these boys make it past round one of rooster selection. But they will make a delicious dinner!

Welcome to Our Farm

***We've moved off the farm. We certainly hope to get back to farming once we've settled somewhere. Sorry, we missed you.***

Brym's Backyard Produce and Poultry is a lifestyle farm just west of Logan, UT. Our animals are primarily pasture fed, our plants manure fed, and the lot experiences no chemical additives or sprays. We sell our products directly from our farm and at the Cache Valley Gardner's Market (in season). We are also active in research (e.g., orchard ecology, dairy processing) and provide a number of workshops (e.g., chicken keeping, cheese making, tree fruit pruning) throughout the year. Please feel free to contact us about our farm anytime.

Upcoming Events at the Farm